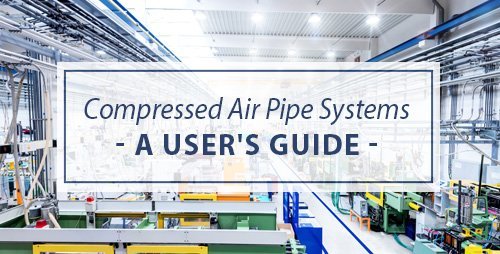 When organizing a shop floor, planning the compressed air pipe system is often one of the last considerations. Environmental conditions and factory equipment requirements often outrank the plan to simplify supply lines. People don’t worry too much about the layout of the piping system because it seems rather straightforward – simply attach a compressor to an end-use device using the pipes. Easy, right? But, no matter how simple it looks in the brochure, when you try to apply it in the shop you quickly discover it gets more complicated than you thought.

Most of the devices you have in your shop will require isolation and ventilation, both of which must be taken into consideration when determining how the piping will lay out. For example, a paint-spraying station needs its own booth with heavy air filtering, meaning it needs to be placed near an outside wall. If you’ve got a curing machine, you need to cool it and will have to place it near an outside wall as well. When many of your devices require an outside wall, your compressed air may have to travel farther than you’d like, which can be a challenge. A major drawback of getting all of your compressed air from one source is that you end up sacrificing simplicity in your piping system.

Lost power through inefficient or faulty air piping systems can wipe out your profit margin. Pay attention to the layout, installation and maintenance of your compressed air pipe system to control costs and keep your business in the black.

People often think leaks are the biggest threat to a compressed air system’s efficiency so they focus on the connectors when designing their project. While connectors do play a part, there’s more to consider. These three factors can have a more significant impact on your pressure efficiency than leaks:

Sharp angles in your compressed air pipe systems impede the speed of flow which reduced the pressure. Compressed air flow is really no different than traffic flow on the highway. If you had to suddenly make a sharp turn, you’d have to significantly slow down.

Because air can’t think or steer, the redirection of the sharp bend in the air pipe sends it ricocheting off the inside, creating an undirected course that wastes energy. This type of air flow is called “laminar.” A convoluted air flow path is called “turbulent.”

Turbulence causes a drop in pressure that will only worsen if you turn up the output on your compressor. You need to avoid those right-angle elbow corners in your piping system wherever possible, because they will cause turbulence and decrease your pressure delivery. The turbulence created by a 90-degree bend can cause a 3 to 5 PSID of pressure loss. While a straight path in air flow is always the most efficient method, if you must turn, eliminate sharp bends and install a series of 30- to 45-degree bends instead.

Over time water will corrode certain types of piping, causing rust to flake off into the air stream. The rust, along with vapor, ends up at the end of the line, clogging your nozzles and contaminating the material coming out of the end of the hose.

In addition to clogging and contamination issues, the corroded interior of a rusted pipe creates a rough surface, directly causing additional turbulence, so moisture has a secondary effect on reducing air pressure.

While this can be an effective way to reduce moisture, drying air before it gets into the compressor can be a better choice. Taking moisture out mid-stream once the air is compressed requires passing your air flow through driers, which can also slow down air flow, reducing pressure.

To address this issue, most air compressor installers recommend you use an aftercooler. Cooling the air as it leaves the compressor will take most of the moisture out before it gets into the piping systems. Two-thirds of the total water content of compressed air will turn to liquid when the air cools to 104°F. The aftercooler should feed into a filter with a drain to remove the liquid from the system.

Dryers, coolers and filters are essential elements of compressed air systems. Just because moisture in compressed air is unavoidable, doesn’t mean it’s acceptable or healthy for your equipment. 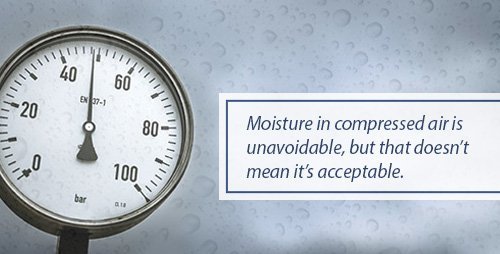 Corrosion in a piping system can break off and quickly turn into an obstruction. The main restriction points in the piping are where you have valves, connectors or devices like dryers or sensors in the circuit. These elements can reduce the diameter of pipe available for air flow, and they accumulate any particles that may be in your air stream. A buildup of particulates will reduce the available pressure downstream and back up pressure upstream.

Air filters will help with some of the unavoidable particulate content, but as with dryers, it’s better to have effective air filters before the compressor to take out any particles that might be in the piping and clog inline devices, valves and end-use nozzles.

If you do get a blockage it’s usually pretty easy to detect – you’ll have excessive pressure before the blockage and insufficient pressure after it. You can eliminate many obstructions by choosing the proper pipe materials. Getting piping made of non-corrosive material automatically removes a large potential for obstructions.

When it comes to planning your new compressed air system you have to consider the type of piping to use. There are two basic options – plastic or metal, with pros and cons to both.

The type of plastic used is critical because you have to make sure the material can withstand the incredible force of the compressed air. Acrylonitrile butadiene styrene (ABS), which is often found in car fenders and Legos, is a good material for piping compressed air. Additionally, polyethylene (PE) piping is produced specifically for compressed air systems.High-density polyethylene (HDPE) is another option.

While polyvinyl chloride (PVC) and chlorinated polyvinyl chloride (CPVC) may be some of the most common types of plastic pipe available, they aren’t suitable for compressed air channels because they can’t withstand the pressure. Early attempts at using PVC and CPVC caused a number of issues, resulting in the Occupational Safety and Health Administration (OSHA) banning them for use in high-pressure systems. ABS, PE and HDPE are all OSHA-approved for compressed air piping, and they’re oil-resistant so they won’t not degrade when compressor lubricants come into contact with them.

It’s also important to note that plastic pipes specifically manufactured for compressed air systems come with OSHA-tested and approved cements that will hold just as long as metal pipe welding.

No matter how advanced engineering plastics get, some people will always believe that metal has greater strength and safety than plastic. Using metal pipes for compressed air has many benefits.

Because some moisture in compressed air systems is unavoidable, the newer metals like stainless steel, aluminum and copper are more popular over galvanized and black steel piping. However, the older metal types are still widely used in new installations even today.

Infinity Compressed Air Piping 20mm-63mm (¾” – 2 ½ “)
Infinity piping offers the performance of heavy, traditional steel piping, at the cost of systems using plastic. Its revolutionary lock-and-seal design ensures a totally safe, leak-free system for all compressed air, vacuum and inert gas applications. The solid brass, nickel-plated fittings make the system easy to use and install. Infinity’s powder-coated aluminum air pipes are so light that they can be handled and installed by one person. There’s no welding, gluing or threading; a simple pipe cutter and de-burring tool are the only tools required.

Elevation Compressed Air Piping 70mm-273mm (2 ½” – 10”)
Elevation provides the superior performance you need and demand from your air system with room to spare. Elevation is engineered to handle high volumes of compressed air. Simple to install and weighing in at less than a conventional steel piping installation, Elevation will save time and money.

Questions? Contact us for more information and advice on maintaining your compressed air system. Michigan Air Solutions is a reliable source for helpful compressor maintenance information. We also offer a wide selection ELGi air dryer systems. Our customers are located in Grand Rapids, Detroit, Lansing, and everywhere in between.

Run more efficiently with this quick reference guide that covers issues such as:

Questions? Contact us for more information and advice on maintaining your compressed air system. Michigan Air Solutions is a reliable source for helpful compressor maintenance information. We also offer a wide selection ELGi air dryer systems. Our customers are located in Grand Rapids, Detroit, Lansing, and everywhere in between.

Should You Winterize Your Air Compressor System?
December 12, 2017 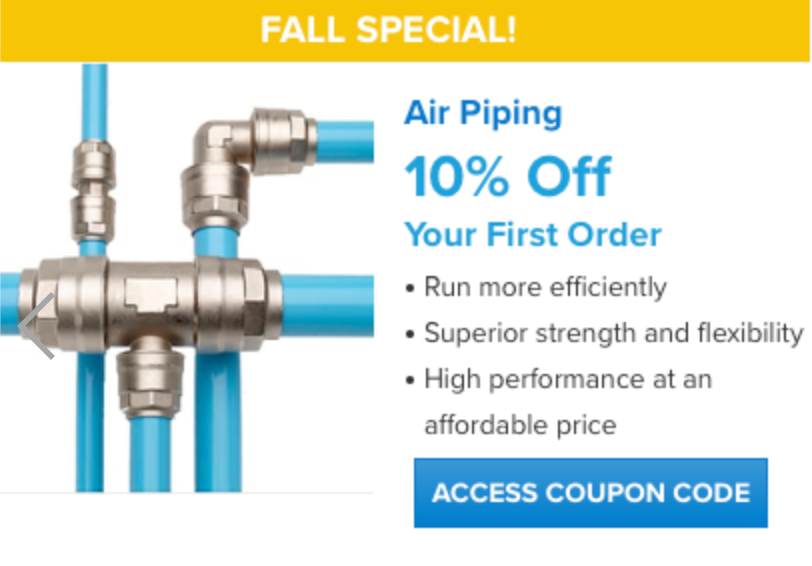